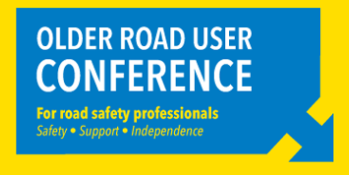 Our chair will be attending and presenting at the Older Road User Conference on Wednesday 19th September at the Royal Automobile Club in London. To find out more about this conference then click here

The conference will set out to achieve the following goals:

Who should attend?
The conference content is primarily intended for road safety and public health practitioners, police and fire and rescue officers, academics, central government employees and highways engineers.

Other information
The delegate fee will include all refreshments on the day, including an excellent lunch.

Road Safety Sergeant Rob Heard will join leading experts from across the country in London today to recommend an action plan that will help make older drivers safer for longer.

With an ageing population, the Older Drivers Task Force believes it vital to take steps to give older drivers the support and confidence they need to ensure they retain their independence, while dismantling the stigma wrongly attached to elderly motorists.

The key recommendation announced today is to raise the age for when older motorists have to make the mandatory self-declaration that they are still fit to drive from 70 to 75.

However, this should only be implemented if proof of an eye sight test is made compulsory.

These recommendations form part of the Supporting Safe Driving into Old Age report, which sets out a national older driver strategy.

Police data suggests that older drivers are less likely to be involved in crashes than young drivers. They are, however, more fragile and four times more likely to die or be seriously injured in a road accident.

More than 25 experts and organisations in transport, health, policing licensing, car manufacturing and insurance joined forces to produce the report, which has seven key recommendations.

1. Raising the automatic requirement for drivers to notify the DVLA at age 70 of any medical condition affecting driving to 75 – if the requirement for an eye sight test is made compulsory

2. Requiring the DVLA to get evidence of an eyesight test at licence renewal

3. Asking a consumer body to prepare specific advice on modern car safety features that are of special significance for older drivers – and consider “silver” NCAP-style assessment

4. Improving road design, signs and markings to meet the highest international standards specifically to aid older drivers but bringing benefits for all drivers

6. Piloting new products which offer an alternative to driving for older people.

Sergeant Rob Heard has played an instrumental role in improving support for older drivers, setting up the innovative Older Drivers Forum in Hampshire and the Isle of Wight, back in June 2013.

Since then it has won celebrity backing from journalists John Sergeant and Jennie Bond.

The work by the forum locally has also been recognised by the report, which has also called for a National Older Drivers Awareness week, something that has been run in Hampshie and the Isle of Wight over the last three years. The next once starts on September 26.

Sgt Heard said: “I have been proud to be part of this national task force and share the great work we have been doing in Hampshire and the Isle of Wight to support older drivers with our Older Drivers Forum partnership.

“The Older Drivers Forum in Hampshire and the Isle of Wight has already helped in supporting and guiding the older motorists and other interested parties in keeping safe on the road.

“The forum is made up of experts in road safety from across Hampshire and the Isle of Wight – from representatives from the emergency services, to charities, local authorities and businesses specialising in keeping older people on the road.

“Whether that’s helping giving practical and informative help and support to continue driving or pointing older drivers in the right direction for an assessment to identify their driving needs’.

The task force, welcomed by the Government, is managed by the Road Safety Foundation and supported by Ageas, the leading insurer of older drivers.

John Plowman, chairman of the Older Drivers Task Force, said: “Our aim is to help older people drive safely for longer by changing our culture.

“A key precondition is that older motorists should be medically fit to drive and seek advice when a limiting condition develops or gets worse, but age itself should not be a barrier to safe driving.

“Encouraging voluntary, confidential driving appraisals so that they become the norm not a stigma and helping older drivers understand and use the latest safety-driven vehicle technology will make a big difference.

“People are living longer, healthier, more active lives, and driving longer. The number of drivers over 85 will double to 1 million by 2025, many without access to public transport. This influx of older drivers has important economic and social value but it also presents road safety risks if we don’t adapt.

“Getting to grips with these risks, without limiting the independence and freedoms of the elderly is an important policy challenge – one to be tackled by the appointment of a minister with responsibility for older drivers.”

On Wednesday 9th December the BBC One Show will feature the Older Drivers Forum hosting an event in Fleet. The event was attended by Jennie Bond and John Sergeant who both went out on a Driving Appraisal to brush up their skills with the Hampshire County Council ‘Driver Skills 60+’ programme. Jennie and John really found the appraisal benefited them to become happier and safer drivers.

Graham Mylward from Hampshire County Council conducted Jennie’s and John’s appraisal and will be appearing on the One Show as well.

If you would like to undertake an appraisal, then visit our courses page to find the right one for your needs. 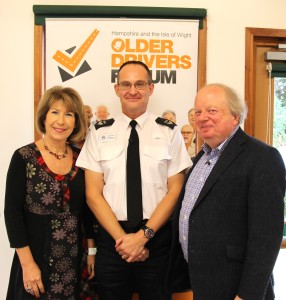 On Tuesday 8th December at the International Road Safety awards ceremony at the Savoy Hotel in London, the Hampshire Older Drivers Forum was highly commended for its contribution to improving Road Safety and awarded a Commendation Certificate by His Royal Highness Prince Michael of Kent.

Sgt Rob Heard says ‘I am extremely proud that the great work of the forum has been recognised internationally. We need to embrace and celebrate the older generation and support those who wish to continue driving with practical, informative advice on how to drive safely for longer, but also give advice when it is time to retire from driving. We know that older motorists have a wealth of experience, confidence and tolerance. However, sight, hearing, reaction time and judgement of speed and distance may not be as sharp as it once was.
Fragility increases with age, so injuries tend to be more serious and recovery takes much longer. Casualty rates do increase for car drivers aged over about 65, and the fatality rate increases significantly.’

‘That’s where we come in. The Older Drivers Forum is about keeping mature motorists on the road safely for longer. Whether that’s helping giving that practical and informative help to continue driving or pointing you in the right direction for an assessment to identify your driving needs – from wing mirror adapters to an elevated driving seat – we’re here to help. We’re a not-for-profit organisation made up of experts in road safety from across Hampshire and the Isle of Wight – from representatives from the emergency services, to charities, local authorities and businesses specialising in keeping older people on the road.’

‘We’ve a number of stakeholders that all have a vital role in contributing towards helping the mature person stay safer on the roads. Special thanks needs to go to Hampshire County Council who run an appraisal for drivers called ‘Driver skills 60+’ and also special thanks to Wessex DriveAbility, a local Driving Mobility Centre, who carry out adaption and ‘Fitness to Drive’ assessments for drivers and passengers who need specialist support for often medical conditions.’